I made a thing: Memeseeks! (Rick & Morty memes and gifs) [UPDATED]

future addedum: A couple of days after this release, the people behind Frinkiac released their own site that does the same thing as Memeseeks, but much nicer looking. (︶︹︺)

I’m a bit sad that I completed a thing and then saw it made obsolete two days later, but at least I probably learned a few things along the way. So I’ve retired Memeseeks, though I hope to modularize all of its functionality and release the code at some point.

Just in time for the new season of Rick & Morty (as well as our own episode on the matter), we just released this thing we’ve been working on: 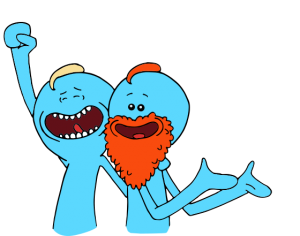 It’s a Rick & Morty memer and giffer (pronounced like the peanut butter?). We’ve been saying at Decipher Scifi that we were working on a few things behind the scenes, and this was one of them. I’m glad to finally have it out there. :)

So meme away, and I hope you like it, and make sure you’re subscribed to the podcast for our Rick & Morty episode in a few days!

I may add some code stuff about this in the future.

PS: Here is our Rick & Morty episode of the podcast!